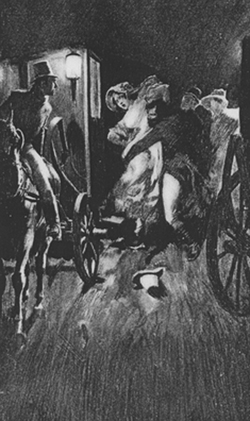 Sir Henry embarked on a bizarre escapade some three years after his wife’s death by abducting and attempting to forcibly marry, at Vernon Mount, Mary Pike. She had come into a substantial inheritance from her father Samuel Pike a prominent banker, of the Pike family who became owners of Bessborough House in Cork, now owned by The Sacred Heart Order of Nuns since 1922. The abduction, though ultimately unsuccessful, resulted in Hayes being sought by the authorities for committing a capital offence. It also prompted his father Atwell to strongly indicate his disapproval of his son’s behaviour and lifestyle by bequeathing Vernon Mount to Sir Henry’s eldest son, the illegitimate Atwell. An equally bizarre ‘stand-off’ followed with Sir Henry openly at large for a number of years before eventually being apprehended, but not before first having a friend and a prominent Freemason by the name of Coughlan claiming a reward for his capture and trial. Coughlan subsequently used the proceeds to purchase the bow-fronted buildings adjacent to the National Monument on the Grand Parade, Cork.

Sentenced to death at the Cork Assizes in 1801 he successfully pleaded with the judge to be granted a diminution of sentence and had it commuted to deportation. Sir Henry was incarcerated at the prison which stood at the bridge at the North Gate of the city.