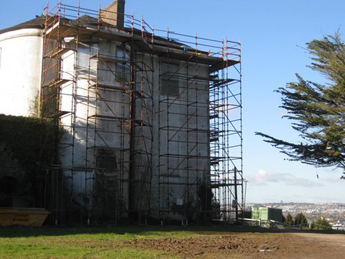 Now reduced to a much constrained site of circa 39 acres, Vernon Mount is now a poor reflection of its former grandeur. The ravages of the motor cycle tracks have scarred the once elegant wooded hillside setting, biting deeply into ground and presenting a construction site like appearance. Damage to mature trees has been significant and encroachment on the stream in the narrow valley to the east of the house an on-going concern. Nonetheless, the setting and prominence of the house, particularly when viewed from the areas north of the N.40, still echos the grandeur of the original.

Until very recently the house was in a perilous state with slates missing from the roof and evidence of other incipient deterioration. Through the intervention of Cork County Council, assisted by the State’s Department of Arts, Heritage and the Gaeltacht, a major renewal of the roofing was undertaken by the public bodies in November 2012. GFP is particularly grateful to Martin Riordan, former Cork County Manager, and his staff for acting so decisively at such a critical stage.

Unfortunately, due to the resistance of the current owner, Cork County Council was prevented from accessing the interior with a view to determining its condition. Not seen since 2008, when the Irish Georgian Society was given access, it is not possible to say how the artworks and general decorative condition of the house have fared since. At that time, it was reported that the interior was in a surprisingly good state. Nevertheless, in the same year, the house was included in the World Monuments Watch List of 100 Most Endangered Sites, a list prepared every two years by the New York based World Monuments Fund.

Entry to the house is via a fine tripartite Ionic door case topped by a semi-circular fanlight. Some time ago serious, but not-irredeemable damage was done to the entry door by attempted break-ins, and security continues to be a major concern.

The Irish Architectural Archive holds a copy of a structural survey of the house and interior undertaken, gratuitously, in 1987 by Cork architect Frank Murphy, a noted conservationist, for the Motor Cycle and Car Club. It revealed a building in urgent need of intervention and provided a costed list of measures to be undertaken. It also provided a set of basic plans of the house which confirm its spatial elegance and ingenuity of design. GFP would welcome a fresh and comprehensive survey of the house in order to both assess the current condition and indicate any further interventions that may be necessary to arrest serious deterioration of the house or its decoration and contents.