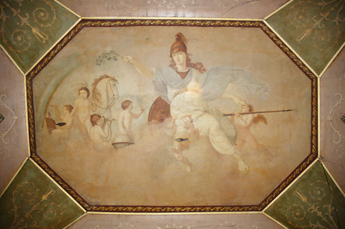 Apart from the elegant architecture of the house, the hopeful survival of painted ceilings and doors by Nathaniel Grogan adds immeasurably to its significance. A ceiling painting on canvas has allegorical references understood to be related to the theme of American Independence and as one of very few surviving works of the period on canvas it adds greatly to the significance of the house. Grogan, described in ‘The Painters of Ireland circa 1660-1920’ as a ‘provincial painter who combined landscape, genre and decorate work’ also spent time soldiering in America and the West Indies under the British flag, returning to Ireland towards the end of the American War of Independence.

The authors Anne Crookshank and the Knight of Glin credit Grogan with painting ‘the most important paintings of Irish peasant life of the period in existence’ and an exhibition of his and fellow painter and mentor John Butt's works in the Crawford Art Gallery in Cork in 2012, gave ample evidence of this talent. Peter Murray, Director of the gallery, said of Grogan ‘at his best…….a very good painter. As a recorder of` everyday scenes and customs, and as a contributor to the legacy of contemporary urban and rural landscape depictions of Cork, he has, nonetheless, left a valued and varied account. A painting by Grogan titled ‘Gothic ruin in the grounds of Vernon Mount’, aka ‘Man drinking in the grounds…etc.’, may be more realistic than anticipated and may, indeed, refer to an actual, contrived, ‘folly’ that still existed when the 1st Edition Ordnance Survey Map of the area was published.