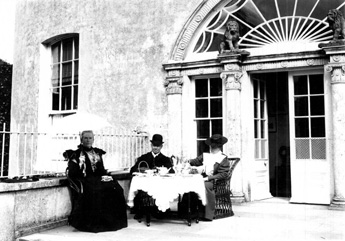 One of the most interesting family connections with Vernon Mount is that of the Lane family. This extended family were affluent merchants in Cork society whose members between 1803-1840 held the position of Lord Mayor on three occasions, as well as High Sheriff on eight occasions. In 1839, William Lane acquired the property from Atwell Hayes, grandson of the original owner, of the same name. He thus became a neighbour of his brother Samuel Lane, who owned the adjoining Frankfield House and demesne. William's family remained in ownership of the property into the 1920s. The Lanes were owners of Lane's South Gate Brewery, which was established in 1758, and by 1837 had become the second largest in the City. William Lane Jnr. J.P., and his son Daniel are recorded as brewery directors in the census of 1901, the same year that the brewery was taken over by its neighbouring rival Beamish and Crawford.

William Jnr.'s daughter Mary Sophia appears in the 1911 census as the head of the household at the age of 40. She was an artist of note, and in 1916 executed a charming painting of two local children Michael and Nellie Walsh, playing in a window area of the big house. This painting, which she gifted to the children's parents, William and Maryann, was brought to the attention of the Partnership by its owner Patrick Foley of Ballycurreen.

A further branch of the Lane family lived nearby in Ballybrack, on Donnybrook Hill. This house was in the mid 1800's the home of one Eliza Lane, whose decision in her will to leave the house to her nephew James Lane, resulted in Ballybrack being the birthplace of one of the world's foremost collectors of impressionist and old masters paintings, Sir Hugh Lane.