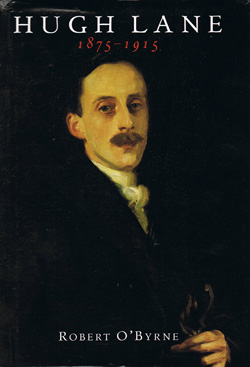 The story begins with James Lane attending Trinity College, Dublin in 1864, as a divinity student. His father, also named James, founded a legal practice in Cork City that continued into the 20th century. In Dublin, the younger James met Adelaide Persse of Roxborough near Loughrea, Co. Galway. They married c.1870 in Galway and in 1875 Adelaide lived temporarily in Cork, where James’s recently deceased aunt, Eliza Lane, left him a period house at Ballybrack, Douglas. Their son was born there on 9th November 1875 and was christened Hugh Percy. Shortly after, mother and child returned to Bath where her husband was ministering. This as the only time Hugh Lane ever spent in Cork.

In 1893 Adelaide separated from James. Her sister Augusta, later Lady Gregory, a major figure in the Irish literary renaissance of the early 20th century, assisted her in doing so. The latter married a wealthy Co Galway landowner Sir William Gregory who was a trustee of the National Gallery in London, inter alia, and became a trusted confidant of her nephew Hugh

Lane, who served his apprenticeship in London art dealerships, became one of the most perceptive and successful traders of the medium. His rise is charted in a fine biography, ‘Hugh Lane’, by Robert O’Byrne, published by The Lilliput Press in 2000. His story became a ‘cause celebre’ in Irish and British artistic and political circles for many years. This arose from Lane’s deep desire to bestow on Dublin an unrivalled art collection of its time, but contingent on the City providing an appropriate building in which to house it. Unresolved up to the time of his tragic death in the sinking of the Lusitania within sight of the coast of Cork in 1915, the impasse had led to Lane deciding to bequeath his collection to the London gallery. However, shortly after his death, a codicil to his will, signed by Lane but unwitnessed, was found in his office in the Dublin gallery where he was a director. It purported to reverse his will and leave his collection to Dublin. This disputed legacy which included his collection of some of the most important Impressionist paintings of the epoch, became a hotly contested battle between the national galleries of Dublin and London, as the paintings continued to reside in London. An truce was eventually brokered in 1959, which resulted in a rotating loan between the two galleries, which continues to this day.

A tenuous connection between Lane and Vernon Mount, is his purchase in 1914 of Gainsborough’s portrait of Admiral Edward Vernon, whose influence in the naming of Vernon Mount is already covered in a previous section. This painting passed to the Dublin gallery on Lane’s death as part of a separate bequest, which was to be used to provide on sale, a fund for further art purchases by the gallery. Unwisely in retrospect, the picture purchased for £735 in 1914, was sold by the gallery trustees in 1917 for £200 as prices dropped dramatically during the First World War. In 2000 the painting was sold for £172,000 and is currently on display as part of The National Portrait Gallery collection at Beningbrough Hall, North Yorkshire, England.

Col. William Persse of the family in Roxborough, Galway had named a holiday house he built in 1788 at Newquay, a small village on the Atlantic coast of County Clare, Mount Vernon in honour of his friend and correspondent George Washington. Persse's great-granddaughter Lady Augusta Gregory used this house as a holiday residence, and entertained many of the luminaries of Ireland's cultural renaissance, among them W.B. Yeats, Sean O'Casey and J.M. Synge, as well as her nephew Sir Hugh Lane.

This is now a guesthouse. It is claimed by the owners that mature trees in the grounds of the late 18th c. house originated from the Mount Vernon estate in Virginia.