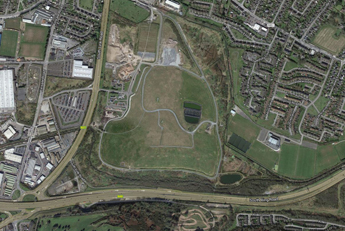 Aerial photo of marsh (now landfilled) lying between N.40 and Turner’s X and between Old Kinsale Road and Douglas. Now in process of final capping and conversion to park uses, 2014. Courtesy Google Maps.

Tramore Valley Park will be located at the former city landfill, which had, for many years been commonly known as Carroll's Bog. The Bog once constituted an extensive surface area in the vicinity of the junction of the Tramore River and Trabeg stream along the south east boundary of Cork city. Due to a very flat gradient and tidal back up from the Douglas estuary, the area developed substantial accumulations of vegetable matter over time. During the period of the Second World War attempts were made to cut turf from the bog for use as domestic fuel. This left characteristic water-filled trench-like scars across the bog.

Once a popular area for adventurous residents of the south city, it provided an untamed natural environment with an eco-system attractive to a varied fauna. It acted as an ancillary reserve to the tidal mudflats of the Douglas estuary to the east of the bog, particularly for waterfowl, birds of prey and seasonal waders. A study carried out by students of one of the south city schools sometime in the 1980's confirmed the presence of this diverse avian population prior to major expansion of the city's nearby municipal landfill. Based on the findings, an unsuccessful call was made for a review of the City Council's intentions.

Forming the line of the city boundary's south eastern limits, the Tramore River meandered its way in an easterly direction across the bog towards Douglas. The river was realigned to flow south and then east paralleling the new N40, before again connecting with its former course near Douglas Village. Widened in section and leveed to provide greater storm water capacity and flood relief, the river lost most of its original natural character.

Recovery has however, gradually occurred as nature has taken its course and parts of the riverbank are now re-populated with native trees, shrubs and other vegetation which in turn has attracted wild birds once more. Fortunately, also, some important remnants of the original bog survive along the Trabeg tributary's course to the north-east of the completed landfill. Although nothing like its former natural glory, these habitats provide a basis for a healthy and diverse ecological resource which can be utilised for educational and nature conservancy purposes - a fact recognised in the park plan recently prepared for the entire area.

Studies of the birdlife of the Douglas estuary have a long history and confirm its national and European status. - It is designated under legislation from both parliaments - and recognised particularly as one of the most important winter habitats within Cork harbour for migrant waders. An attractive pamphlet, produced by Cork County Council, assisted by
Bord Gais (Irish Gas), in the 1980's identified the principal species and numbers overwintering.

Used as a municipal landfill for the best part of 50 years, most of the marsh on either side of the original course of the Tramore River has now disappeared except for the small remnants referred to.  Civic waste disposal at the site echoed the practice generally undertaken in Ireland up to the 1980’s when re-cycling was non-existent.  With the advent of EU (then EEC) membership in 1973, the gradual transposition into Irish law of Community directives on the environment, and a growing national realisation of the adverse impacts of sanitary landfilling, the need for waste reduction and recycling occurred. Lining of dumps, draining, treatment of landfill effluents, extraction of bio-energy from waste gases and the capping of cellular sections became the ‘gold standard’.  Currently the energy generated from the landfill gasses is capable of fully powering the needs of 1,000 homes in Cork. Accompanied by this, on-site facilities for dry recyclable materials and other waste requiring special treatment became the norm.  As a result, and through the good management of Cork City Council, the site at the landfill has become a model of best practice. Now in its final stage of capping, the largely completed site is being prepared for the first stage implementation works of the Tramore Valley Park Plan.