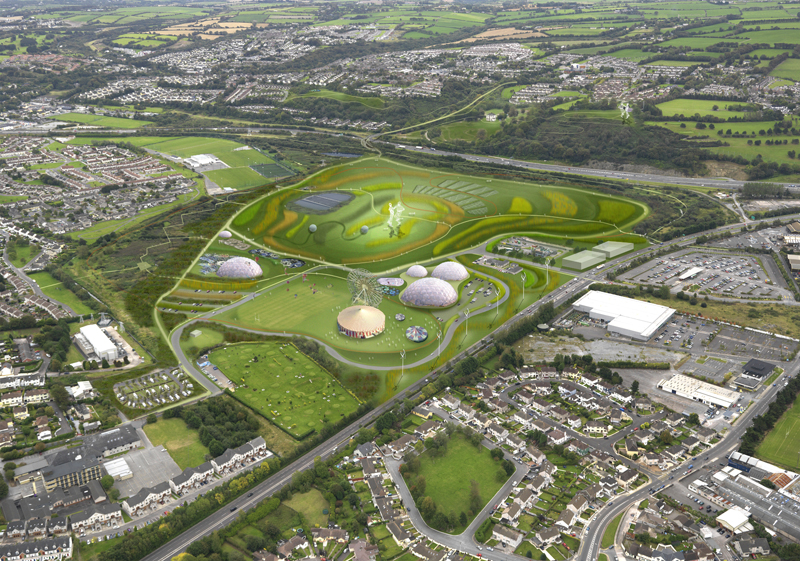 Prepared by a planning and landscape consultancy, Brady Shipman Martin, an ambitious scenario has been sketched out for both the former landfill and the hillside public open spaces to the south of it and the intervening N.40 highway. Inclusion of the latter area, containing the Vernon Mount lands, which is in the jurisdiction of Cork County Council, was due to the lobbying efforts of Grange Frankfield Partnership and the foresight of then County Manager, Martin Riordan, and his staff. An integrated park plan for some 245 acres within a locally accessible catchment of over 40,000 urban residents, with provision for a connecting cycle-cum-pedestrian bridge over the N.40 as part of a more extensive network of pedestrian and cycle-paths, was published in 2012 and adopted by both City and County Councils in 2013. When completed the resultant amenity will be the largest public park in the city and environs.

Leisure events and renewable energy will form key components of the plan. In the master plan separate zones are defined for the lands to the north and south of the N.40. Each is then broken down into broadly described sub-component sections, each of which is intended to cater for a range of compatible uses. These sub-component sections are then defined, in detail, in both use terms and graphically, to indicate the proposed activities and associated infrastructure. For the overall park some 56 ‘elements’ i.e. activities, uses, structures and facilities are specified. Presumably the wide suite of potential uses will be subject to adjustment as the plan evolves. Nonetheless, the vision presented is one of marvellous potential for this strategically located area, close to a substantial local urban population but also accessible to a much more extensive sub-regional catchment.

Vernon Mount and its role in park.

An important cultural asset capable of adding an historical perspective to the park is the surviving Vernon Mount House, a prominently located structure visible from the landfill section of the proposed park. Its potential interaction with the rest of the park is considered by GFP to constitute a unique and key element that will both benefit from and contribute to the park’s success.

Although still in private ownership Vernon Mount House is considered as a key sub-component of the zoning for the area to the south of the N.40. Already protected by conservation and amenity zoning by Cork County Council, the house and remaining demesne surrounding it, are visualized as fulfilling a role that will be conducive to its economic restoration and re-use.

GFP believes this new context presented by the Tramore Valley Park Plan, incorporating as it does provision for a ‘green bridge’ over the N.40 and access to an extensive range of leisure and cultural activities, will act as an incentive to the current owners to creatively secure a sustainable future for Vernon Mount.

While much of the landfill is now relatively featureless and deficient in ecological diversity, the elevated mound or dome in the centre of the former landfill constitutes a permanent feature with potential for uses that did not exist before. Surviving remnants of the former marsh – as well as the storm runoff pond – are capable of being further enhanced as wildlife habitats and educational resources. The re-aligned Tramore River has, in the intervening years, partially reverted to a naturalised habitat attractive to wildlife.

The landfill site will also settle over time as its contents degrade and methane gas is extracted. Structural limitations of the capped site require that special foundation pads will have to be designed to carry lightweight, demountable structures suitable for events and exhibitions.

In the wider park to the south of the N.40, woodland surviving from the original Vernon Mount demesne has already been designated by Cork County Council as an area of local bio-diversity.

Currently, the consultants who prepared the plan are drawing up detailed works specifications for Cork City Council for the former landfill section of the park with works scheduled to commence this year, 2014. Capping of the final section of the landfill to the north of the site is also currently in progress.

To the south of the N.40, in the woodland along the small valley to the immediate east of Vernon Mount, GFP has embarked on a restoration and conservation programme. Commencing in August 2013, the 12 month project entails restoration and extension of woodland walks, removal of invasive plant species currently occluding the stream, and new planting. Aided by South East Cork Area Development (SECAD) under the TÚS scheme, significant progress has been made to date. This stream valley is also the route of the proposed walk-cum-cycleway that will connect the suburban area of Grange Frankfield, via the proposed green bridge over the N.40, to the remainder of the park.