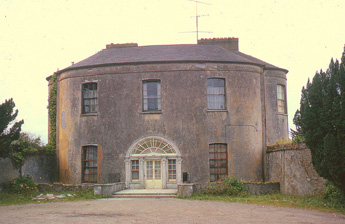 Architect:
The design of Vernon Mount is attributed to Abraham Hargrave, an English architect and contractor who settled in Cork and is credited with designing and building a wide spectrum of structures including bridges, military barracks quays, factories, churches and market houses. He also designed/built a number of other ‘Big Houses’ of the period including Castle Hyde, Lota Beg and Hoddersfield. He arrived in Cork in 1789, and superintended the completion of the first St. Patrick's Bridge over the River Lee, which was opened on the 29 September 1789. Also involved in the new town of Fermoy developed by John Anderson, some 30km north of Cork city, Hargrave designed and built a military barracks, linen factory and church. He also oversaw the construction of the extensive military barracks overlooking Cork city, which was extended in 1849 and named after Queen Victoria, who visited the city in that year. In 1922 it was renamed Collins Barracks.

Design style:
In ‘The Houses of Ireland’ [Brian de Breffny and Rosemary ffolliott], Vernon Mount is described as ‘a small but exquisite house’ and ‘the whole concept of the house (is) towards entertaining and gracious living’ because of its decoration, fittings and interior design. Painted ceilings and doors by Nathaniel Grogan, a Cork artist of the period, are described as being in the manner of Angelica Kauffman – a Swiss born artist who specialized in Classical subject matter. A colonnaded first floor landing with a shallow dome and the entrance hall and staircase also receive particular attention but commented ‘this enchanting house is at variance with everything that is known of Sir Henry’s quizzical character’.

Perhaps the most detailed, lavishly illustrated and lyrical description of the house, by the late Desmond FitzGerald, Knight of Glin, and Donough Cahill of the Irish Georgian Society, was published in the Irish Arts Review winter 2007 edition. As the authors described the house ‘stands two stories over basement level and is distinguished for the curvilinear elegance and subtlety in design of its facades and for the sophistication of its planning decorative interiors’. The authors go on to laud the oval shaped landing or atrium on the first floor and describe it as ‘one of the most original features of the house’. ‘All in all’, the authors conclude, ‘the plan, the curved elevations, the staircase, the oval atrium, the decoration and the setting must make Vernon Mount unique in the history of the Irish villa and is a building of national importance’.

More recently, in another elegant publication - the catalogue for an exhibition of paintings by Nathaniel Grogan and John Butts at the Crawford Art Gallery, Cork, in 2012 - the house is described by Peter Murray, the gallery’s director, as ‘a little Petit Trianon…….one of the most exquisitely designed houses of eighteenth century Ireland’.

A further, disputed, contention is that the house features iconography of a Masonic character in its design and decoration [ Ref: Rolf Grunseit’s ‘Australia’s Rebel Convict’]. While incorporation of Masonic iconography in ‘big house’ design of the 18th century has been acknowledged as a reality elsewhere in the British Isles, and while Henry Hayes later demonstrated his Masonic pedigree, it remains debatable if this was also to be the case for Vernon Mount.

Listed as a Protected Structure in Cork County Council’s Development Plan [00480], and recorded in Ireland’s National Inventory of Architectural Heritage [20871029], the house and its interior currently enjoy comprehensive legal protection by both local and national government. As a result of petitioning by Grange Frankfield Partnership (GFP), both authorities, Cork County Council and The Department of Arts, Heritage and the Gaeltacht intervened to secure urgent and extensive repairs to the roof in late 2012.

Prior to this, in 2008, the Irish Georgian Society was instrumental in having Vernon Mount placed on the World Monuments Fund List of 100 Most Endangered Sites and secured an intervention by the local authority to remedy some of the external deterioration in the house.