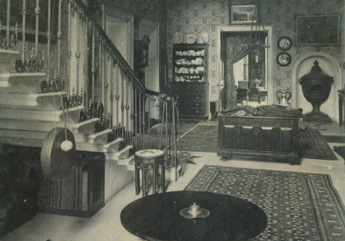 While some dispute exists as to the original owner, or commissioning party, it seems clear that it was Atwell Hayes, a prosperous Cork merchant with interest in brewing, milling and glass-making – who had the house designed and built, and was its first occupant before handing it on to his son, Henry.

Also disputed is the date of construction, with the original date of circa 1784 [Bence-Jones] now regarded as improbable – on grounds relating to Hargrave’s arrival in Cork in 1789, the particular style of the architecture of the period, and a sale notice for the house and demesne in the Cork Courier Newspaper 10 December 1794 describing "an entirely new house known as Vernon Mount".

Through a succession of owners and lessees the house and its much reduced demesne passed eventually to the Munster Motorcycle and Car Club in 1959, thus saving the house by using it as a club headquarters, and incorporating a motocross track in the surrounding grounds. In the 1990’s the club sold the house and land, while retaining a lease to the grounds, to its current owner/s, a company led by Jonathan Moss, an expatriate living in California.

The naming of Vernon Mount

This commemorates George Washington’s ancestral home which had originally been named Mount Vernon by his half-brother Lawrence. The latter served under the eminent British Naval Commander Edward Vernon for whom he had great admiration.

The naming of the Hayes residence in Cork was an expression of political empathy and support for the achievement of American Independence. It could be viewed as a strange irony that the subject of the naming was himself a bastion of British colonial power. 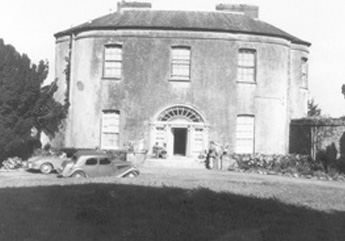 Sequence of Owners and Occupiers