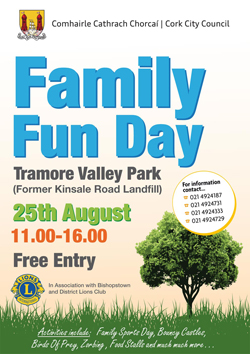 Cork City Council has already hosted a number of public events at the site of the proposed park in 2011 and 2012 including an athletic fun-run, and a family fun day. Proceeds raised from participants and spectators have been donated to local charities. GFP participated in both of the latter events in helping the Council in the management of operations on the day, fund raising, and in the pre-planning and publicising of the event in the press and on radio and television. During the family fun day in August 2012, at which the Tramore Valley Park Plan was publicly launched, GFP organised and staffed an accompanying graphic display of its own proposals for Vernon Mount in the proposed park. This complemented the Council’s display and also attracted wide public interest and support from many of the estimated 8,000 visitors to the site.

Cork City Council has been rolling out a cycleway network throughout the city as part of a medium-term, city-wide ‘Green Commuting’ strategy. Mostly on-road till now, off-road purpose-built cycle ways are also envisaged. A small number of combined pedestrian/cycle ways are already in existence in the city and its urban environs – these are largely used for recreational purposes. Because of its topographical structure, Cork city presents a corrugated landform with alternating ridges and valleys running east-west across the city and its environs. This presents a gradient challenge for would-be cyclists and cycleway designers.  It also suggests, inter alia, a possible role for electric bikes in a city like Cork.